Is it Starman or is it the Roadster?

After the test flight of the Falcon Heavy, we've gotten a flood of questions related to its wonderfully quirky payload. Before the launch, this payload was known as 'the Roadster', and we created a roadster tag. On launch day, it was officially named Starman by SpaceX. It has generated so much interest among the general public, we have now gotten a slew of questions about Starman, and some of those don't refer to it being a Roadster at all. In fact, in the case of some questions, I think the asker doesn't know it's a Roadster. They just know it's a car.

The procedure when there are two common terms for the same thing is to create two tags, and make one a synonym of the other, so that a search for either will include questions tagged with all the synonyms. But one tag rules them all - the others are added as part of it, more or less.

So, do we create the Starman tag and make it the one true tag, or make it a sub-term of Roadster?

Or do we even change the Roadster tag to Starman?

Starman is in the Roadster, so therefore the correct tag should be Roadster. I think Starman should be a synonym of Roadster.

According to Space-Track, the name is "TESLA ROADSTER/FALCON 9H", so it would seem Roadster should be the master tag.

Also, Horizons calls it "Tesla Roadster (AKA: Starman, 2018-017A)", or when choosing it as an option "SpaceX Roadster (spacecraft) (Tesla)".

Bottom line, Roadster or Tesla Roadster are the appropriate names. Starman is better picked up in popular culture, but isn't really required.

I concur with @PearsonArtPhoto's answer:

Jonathan McDowell has tweeted the Satellite Catalog. I noticed this in a retweet by the Air Force Space Command itself! 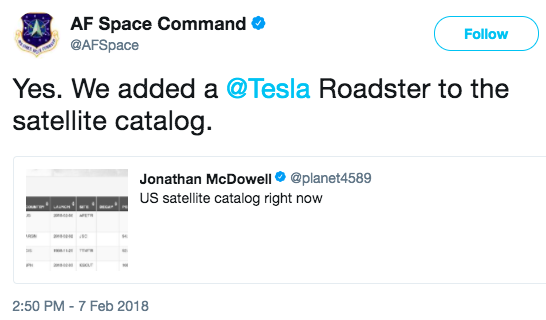 Therefore it's probably OK, this one time, to show it here.

Not the answer you're looking for? Browse other questions tagged discussion status-completed tags tag-synonyms .

2
Live chat room event: Ariane 5 ECA rocket (VA215) to launch the Eutelsat 25B and GSAT 7 satellites (Aug. 29, 2013 at 8:10 p.m. UTC/GMT)
6
What should be our standard for creating speculative craft/mission tags?
1
What is our definition of "space agency"?
1
Tags for pre-Sputnik topics
1
Please help me to understand how tags end up visible when you start typing a different but related term in the tagging window of a question post
0
We have both electric-propulsion and ion-thruster tags, are they distinct? What would be good usage guidance for electric-propulsion?
2
Should we clean up and separate 'attitude' and 'attitude-determination-and-control' questions, or just further merge these last two tags?
1
How to determine on which questions the falcon9-r and falcon-9 tags do and don't belong?