Why is this answer still here?

I've flagged, voted for deletion and down-voted this but it's still here after 27 hours. Are the review queue's inactive, or do the participants feel this is a proper stackexchange answer?

I've added "rocket-shaped" arrows to indicate the parts that make me feel it's not a serious answer, but since it's not even close to a proper answer even without the annotated items, aren't these usually deleted or moved to comments fairly quickly? 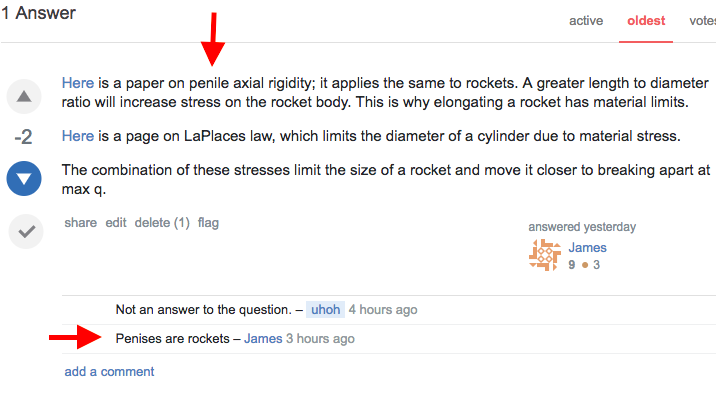 For questions like that, flag it for moderator attention, don't just hit the delete button and count on people paying attention to the review queues. It's now appropriately managed.

Looking at the flagging history, I can see that it was flagged by uhoh at 4:07 UTC, and the flag was responded to at 12:40 UTC. That pretty much happened in the middle of the night, so only 8 hours. I can see that a delete vote was cast earlier. It might be that the flag type was one of those that moderators don't see immediately and wasn't included in the history (I think low quality isn't reviewed immediately)

Here's my proposed reconstruction of what happened.

Because the moderation activity here is so speedy and efficient, I was surprised when the flag wasn't acted on quickly. In my attempt to flag again in case my first flag didn't take, or that I hadn't flagged, I removed the flag by not looking closely at the dialogue box and noticing that even though there were options, the active action was to remove the flag. Now there's no record of it. 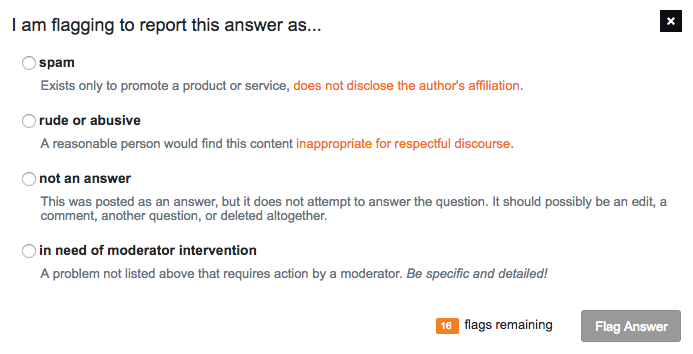 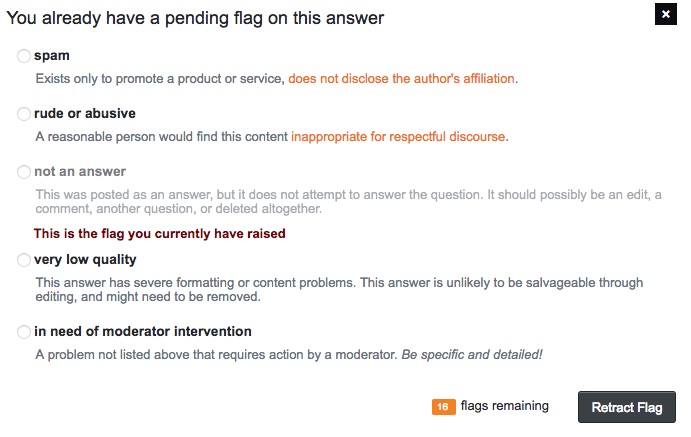 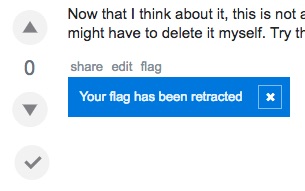 above: what the reassuring message looks like if you click "Retract". Same color and shape as the "We'll look into it" message, except that it now says the opposite.

4
Is this question asked on scifi.stackexchange.com on-topic here?
2
Why is this not an obsolete comment?
5
Why was this question downvoted? How might I get it answered?
4
Why are we here?
0
Why am I being down voted without a solid answer?
1
Should I accept this answer or wait for some verification?
1
Why is this a good, or even an acceptable answer to leave on this site?
2
Okay if I re-ask this Space Exploration-related question from Astronomy SE here?
1
Why is this question about science on Venus off-topic?