Is there a way to embed interactive planetary maps in stackexchange?

In the question Any newer information on the Mars-3 landing site since early 2013? I have pasted a screenshot of an interactive Google map of Mars with a landmark indicating the area covered by an image from the HiRISE camera of the Mars Reconnaissance Orbiter. The working interactive Google map of MARS is at the Lunar & Planetary Laboratory's page Could This Be the Soviet Mars 3 Lander? ESP_031036_1345.

Looking to the future, there will likely be more and more interest in geographic locations on Mars and the Moon in SXSE. Is there a way to paste these kinds of objects into SE questions or answers now? We can add things that move (GIFs and YouTubes) but so far not interactive things like WebGL objects.

Is there currently any way to include interactive (e.g. zoomable, panable) maps?

note: I have not included the feature-request tag yet, and I have done this "by-design". Let's see if there exists a way already, or what other interest or suggestions or comments happen first. I was lightly beaten-up here for even asking how difficult adding a feature might be, which I thought would have been the prudent to do before making a case for it; I don't want to run the gauntlet again quite yet. Apparently asking how hard a thing is before asking for the thing itself is not allowed, presumably because it deprives people from the thrill of asking "What? Don't you know how hard that is???" ;)

IMO you're putting things in the wrong order. You need a compelling use-case before starting to think about how it could be done.

You can't have a "what's needed for Stack Exchange to support this?" discussion without discussing why we should support it in the first place.

So please do not add the feature-request tag here. I am not asking how hard a new feature is, nor am I asking for a new feature. Thanks!

below: "running the gauntlet" resized 50% from here. 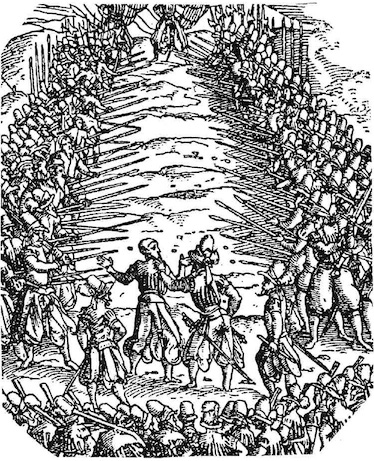 3
Is there a way to disable mathjax in a comment
14
...And then there was silence... (to our esteemed CMs)
2
Confusion in creating a tag
2
Any way to award a second +100 bounty to a second answer to the same question?
3
Are there ways to make posts with images better for low connect speed users? Does the spoiler feature help?
4
Is there a way to prevent a question from being eligible for Hot Network Questions?
3
What's the easiest way to get a link directly to an answer?
3
I edited but forgot to vote to remain open a question in the review queue, is there a way to do it now? Would it make any difference if I did?
3
How can I find something I wrote years ago in The Pod Bay?
2
Is there a way to search for all questions by a user who deleted their account?