How can NASA be alerted to their expired security certificates?

Linking to a NASA document as a reference in an answer or a question is at the moment complicated by the fact that they seem to have a bunch of expired security certificates for their websites. I think that makes this on topic here. The issue doesn't show up unless you try to access the sorts of documents that are deeper within the system. Here are two I just ran into: 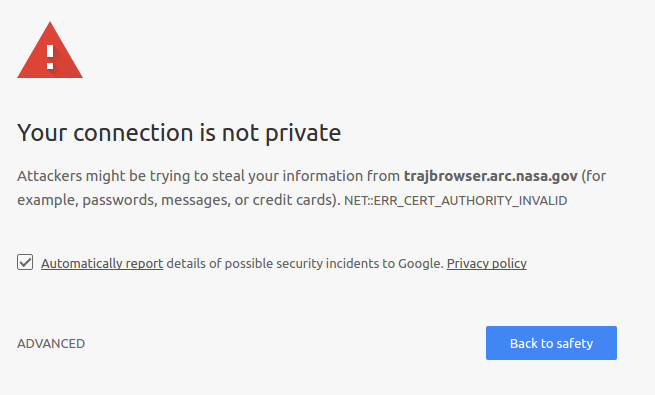 That one was for their Trajectory Browser page, a very useful tool. 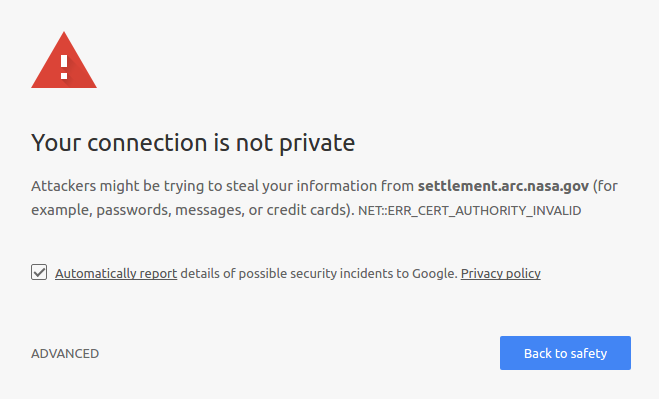 That one was for the Space Settlement Design Study table of contents, a classic document. I have also run into this over the last week for documents hosted at KSC, Johnson, and SSERVI.

I briefly started looking for the place to try to contact someone to alert them to this issue, but gave up after a few minutes. There must be a much more targeted way to contact them about this than the general emails and phone numbers I can find on the websites. I have a feeling I could spend a long time doing it that way and not get to the person who could really do something about this.

I used to look for an alternate source of the information I was after when I ran into this problem with NASA (I have run into the issue repeatedly over the last year). I wasn't sure if it might mean they had been hacked. The notice is pretty extreme, so I decided not to risk it.

Does anyone have a tip for how I might more quickly get to someone who can do something about this problem?

The usual process when wanting to report any security bug, vulnerability or other security related issue is to contact security@xxxx so in this case try security@nasa.gov

This should be connected to the security team who can respond or at least point the communication to the right team (certificate management, website management or whatever.)

I mentioned this as a comment over on the infosec page, but a huge number of NASA sites -- particularly the ones not directly under the control of the various PAOs -- are going to be signed by certificates derived from the NASA Operational Certificate Authority, which emanates from the US Treasury PKI CA, which is cross-certified by the Federal Common Policy CA.

Most browsers by default do not list any of these as a trusted CA, as most public-facing government websites are secured using a commercial CA that is broadly trusted. (Interestingly, there appears to be minimal commonality in various US government website certificate chains. www.nasa.gov uses USERTrust via Gandi, www.congress.gov and www.irs.gov use Entrust, www.ed.gov uses GeoTrust, www.whitehouse.gov uses VeriSign via Symantec.)

Since most of these sites are intended for internal consumption, most intended users will access them using agency- or contractor-issued computers, which have additional CAs added as part of the standard load.

Ultimately, it's up to you if you want to add those CAs to your trusted store, but I very much doubt you will have any luck getting NASA to change the PKI infrastructure that secures literally thousands of internal sites.

Not the answer you're looking for? Browse other questions tagged discussion resources .

12
How can we work to include more professional questions in this site?
4
Multiplying content and possibly 'wrong' information - How handle it?
8
Ideas for off-site Space Exploration community promotion ads
9
Winter Bash 2014 Hat Dash Yay or Nay?
4
Credible Space-Exploration Sources
0
What might these silent close-voters' reasons have been? How might I address them?
4
Are meaningless link titles like "Source" sub-optimal, leaving the answer unrepairable if a link rots/breaks?
11
January 2020 Moderator Election — Community Interest Check
3
What is "NIX" on the NASA Technical Reports Server?
5
Alternate orbital mechanics question