I wanted to see if there was an ion-thruster or ion-propulsion tag when I was writing this question. When I started typing ion some tags appeared, but nothing with the word ion in it instead, other tags that contained that sequence of three letters appeared. However, when I stated typing thr, then "ion-thruster" appeared.

Is this unexpected behavior? Shouldn't typing the first three letters ion show me (at least) things that begin with those three letters?

I've used the tag bug here, because I found this behavior to be unexpected. 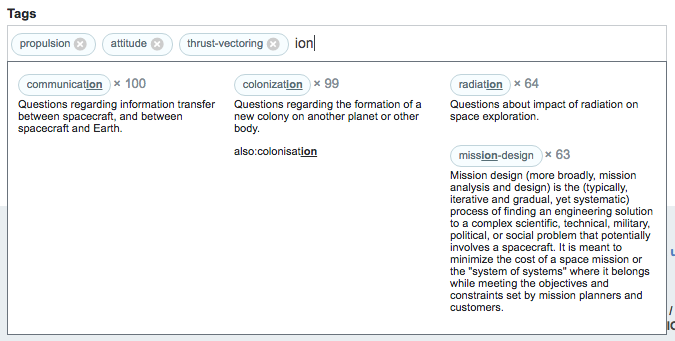 Hyphens are excluded from tag autocomplete. ion-thruster appears as you type ion-t or iont -- hyphens are ignored both ways.

Also, tag autocomplete is a full text substring match, not a prefix search, by design.

Not the answer you're looking for? Browse other questions tagged bug status-bydesign tags search .

9
Is this apparently recurring problem with links just a coincidence? Anyone else seen it?
1
Second time I've ended up with my answer becoming double-posted. What might be happening here?
0
What to do when I feel the status-bydesign tag was added too soon or is not really justified?

0
Why were my tag edits rejected?
2
“Newest questions” button missing when returning from meta
2
Confusion in creating a tag
1
Pod Bay bug, or SE chat feature by design?
10
Should we have an [up-goer-five] tag?
3
Is the SXSE review queue (and new reputation indicator) now broken?
5
Role of country tags
3
Is the mission-design tag description wrong? Should the trajectory-design tag be somehow nixed?
1
Please help me to understand how tags end up visible when you start typing a different but related term in the tagging window of a question post