For a site supposedly wholly and unabashedly devoted to rocket science, this tag is kinda superfluous.

Agreed. Might I add that we already have such tags as rockets / rocket, many more specific ones, and also the science tag (the latter also quite possibly superfluous and questions that use them should be checked if they could be re-tagged with more specific / descriptive ones). So yes, superfluous².

I however propose synonymizing rocket-science with rockets (on grounds of going through the questions that use them and noticing they are all about rockets and none about rocket science that isn't about rockets LOL), with the latter being a merged master, so the system automatically replaces former with the latter (all existing ones and on submit), while keeping former as a select option during question tagging for easier searching. "Burniation" and "blacklistion" seem rather severe tho, despite the temptation!! :) 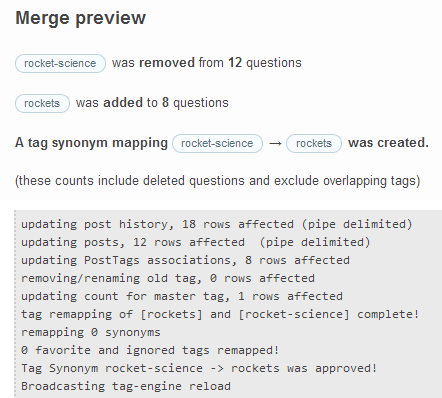 Not the answer you're looking for? Browse other questions tagged discussion status-completed tags .

6
Should we disallow the Exploration tag?
5
Clarify celestial-mechanics tag
3
Can we get a tag for the Tsiolkovsky Rocket Equation?
2
Confusion in creating a tag
4
Should we have separate tags for the Soyuz launcher and the Soyuz spacecraft?
2
Can we have a [pollution] tag?
3
Would a "Speculation" tag be useful?
9
Rename the [bfr] tag
2
planetary science: overlap with Astronomy SE
5
Ambigous tag, "modeling"