Should we broaden the type of questions that are in scope?

Looking at http://area51.stackexchange.com/proposals/43283/space-exploration we are 66 days into beta and are at "needs work" in two areas. Number of questions per day and number of visits per day.

I think we are all pretty much in agreement about the type of site we would like this to be, and the types of questions and answers we would expect to see here in 10 years. There is delicate balance between being too focused and limiting the participation to the point it chokes the site to death; and allowing to much outside the scope so the site deteriorates into the fringes...

I wonder if our goals are set to high for the times, or if we need to keep our scope and goals as they are and expect time will bring the outcome we expect.

The scope is fine, we get literally incredible numbers of questions, answers, i.e. anything else when compared to the number of daily visits of our website. Going against the definition of our scope now, that we've somewhat successfully defined it and might only need smaller refinements over the course of time would be counterproductive. We have established our presence among other Stack Exchange sites well enough, in my opinion and considering our age, and already gained some respect. That is rather apparent, when you consider we have ~ 180 visits per day, yet still manage to keep the site going strong with roughly 20 extremely active users each and every day. It is also extremely important, not to make other, already established Stack Exchange website communities wonder, if we are really needed at all.

When we manage to increase our numbers, all this will only improve on its own. It ought to. I'm not at liberty to discuss sitewide statistics in great detail, since it's one of the requirements in the Moderator Agreement that I signed not to, but I can give a fair opinion on the matter. And that is - we're actually doing fine, but of course need to persist. The statistics are actually consistent with a relatively young website, and far from conclusive that we better start thinking of extending our scope to better them. It is also my firm belief we've managed to keep good quality of questions and answers, our statistics are slowly progressing, while a strong dip in the number of visits after the initial few weeks of public beta are perfectly normal for any young and public beta Stack Exchange website: 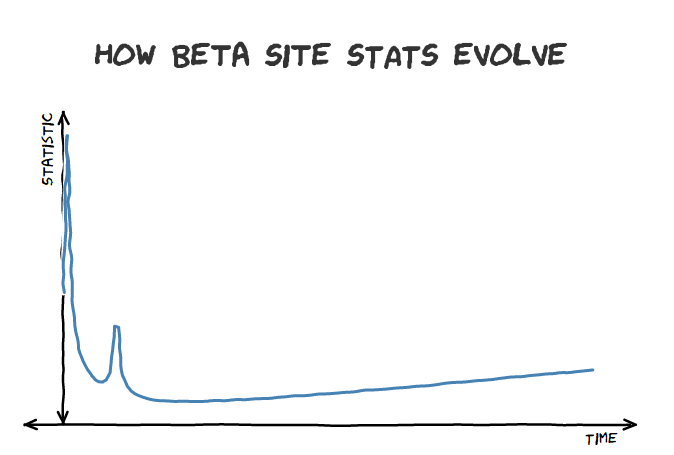 I also have to mention that I've not in a single instance met with any resistance to us having our own website as it is currently defined. In fact, we're greatly helped by a few other websites to raise in numbers, and our moderators (including myself) cooperate well with moderators of other Stack Exchange sites, too. This becomes somewhat apparent, if you look at the upvotes (and lack of downvotes) community promotion ads for our website got on other Stack Exchange meta websites, where members vote on individual ads for their rotation space on their respective main sites. There are also other indications that we're doing just fine, but again, I'm not at liberty to discuss them.

But, we can of course do better. I guess this is a run of the mill response that can be said for any still struggling for attention of the wider audience website. We're doing our best to somewhat raise the number of visits per day that we get, and while we have many threads in our own meta discussing how we could achieve that, I'm going to repeat a few major points:

So, as you can see, there are many ways each of us could help us increase our number of visits and with it, hopefully, numbers of active members. I'm sure there are other ideas floating about how to help achieve that, so the main answer in how any of you can help us with it is hidden in your desire to participate more, actively work on improving our contents and general impression newcomers will be left with. The rest will follow on its own.

In addition to @TildalWave's answer, let me add a bit.

There is at least one time that we have clearly added to the original scope, including planetary sciences. There are relatively few questions on that subject yet, but that would be a good area to start increasing the number of questions, bringing in new people.

While our visit count is low in general, there is a respectable number of pages per visit. As TildalWave mentioned, we can't post specifics, but I'm comfortable saying that I'd be happy if my personal blog had half the number that this site has.

Lastly, what would we expand our site to include? There's two major tangential topics that have been discussed that we bring in, both when we were still in Area 51. While both had some support, I think it's worth mentioning that we were the last of the 3 proposed, and the first to make it to beta.

The second is Aerospace, as discussed here. We could add discussions of missiles, sounding rockets, aeroplanes, and other related topics. At least for me, a site talking about Airplanes isn't that interesting. Aerospace in general is a bit more. But there is a significant number of questions on topic for this site which would be questionable in a general purpose aerospace site, such as discussing the science behind specific missions to other planets. Furthermore, a general purpose aerospace site would talk about piloting aircraft, which I really don't think mixes well for a site like this. Museums often combine the two, but I know which part of those museums I spend more time in, and that's looking at the space stuff.

Bottom line is, if you want to expand the scope of the site, take a topic that is on topic, but there are few questions about it. Then ask a bunch of questions on the topic, spread over maybe 1 per day. That will help to expand the scope. We might consider astronomy merge, but only if one or the other of us fails as a site.

Not the answer you're looking for? Browse other questions tagged discussion scope public-beta .

4
Should questions about black hole, FTL and other possible but still only theoretical topics by out of scope?
3
We need to step it up with the questions!
10
Space.SE resolution: 1000+ questions by year end
4
Why are we here?
4
Should we edit a date into questions that are moving targets?
2
Too Broad in Space Exploration?
6
Overzealous insta-closing of new users' first question with less than 5 site Q's per day here
6
Is beta-graduation the goal here? With a limited reserve of high-quality answer-writers, might it present more challenges?
9
Any opposition if I ask a series of questions for the 50th anniversary of Apollo 13?