No sense of humor when people ask obviously classified questions?

I'm a little disappointed my awesome answer to a question about deorbiting classified satellites was deleted.

I agree with the moderator comment that it wasn't a serious attempt to answer the question (for those who can't see it, it had a lot of redacted text). But it was an attempt to use humor to communicate something to the OP in a light-hearted way: you cannot expect serious answers to questions that would obviously be classified and people thus will either not know the answers to, or know and would be unable to answer, or could speculate but wouldn't be comfortable doing that on the internet where anyone could see.

I'm all for having rules, but I think a certain amount of humor and levity would not be a problem, and the answer would serve as a little warning sign to folks that questions about classified topics are not likely to get very good answers because the people who know them aren't posting.

Well I was the deleting moderator, and I must say your post made me laugh out loud (for the good reasons, not the bad ones), so first and foremost, thanks for that!

It might make you feel slightly better about it, knowing that I saved a screen grab of your post, and it indeed put a smile on probably many more faces in a few chat rooms that I later trolled with it, so here it is in all its glory and will hopefully do that for others as well: 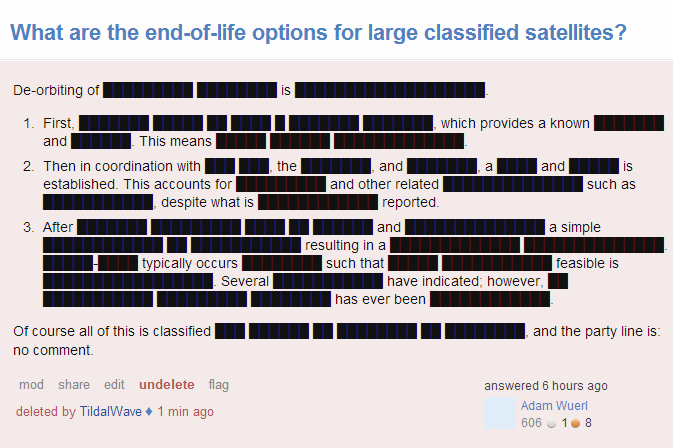 Now for the serious part. Humor is appreciated, and indeed sometimes even needed to help us cope with everyday frustrations better, but there are a few problems with your humorous answer that warranted deletion:

So in short, humor is by far not unacceptable, but your "answer" was deleted for not attempting to provide a useful answer to the question asked in that thread, for which the flag was raised to bring it to moderators attention, and when I reviewed it, I had no reason not to disagree with it.

You could have however provided a proper answer to the question on top of having part of it humorous, or making some point in a jokey manner. That would be IMO perfectly fine, as long as it doesn't offend anyone, well, at least not intentionally try to. In fact we have a perfect example of combining humor with a good answer: How would one go about speeding up the rotation of a planet?

And here's the proof that this actually works: 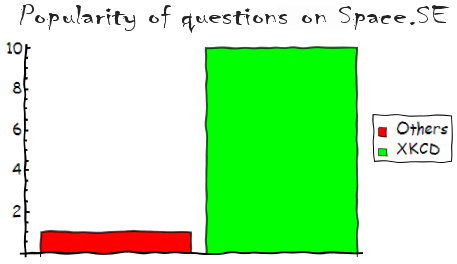 The bar chart has spoken! ;)

I think I flagged this question and possibly left a comment on it.

In addition to TildalWave's answer, there was nothing particularly wrong with posting the answer, all things in moderation and with reasonably good taste. The problem is just in keeping it as an answer.

You should not feel chastised, in fact given the responses here, it was well received. Just part of the housekeeping of a successful site.

For the record, I enjoyed it also. My first thought was you had found a real piece and posted it, had to take a second look for the smile :)

6
Should questions with little information due to classified nature be asked?
2
Humor and current events, do we want to encourage them?

7
Do we want a community blog?
5
Where can you find stuff online to learn the math and physics key to Space Exploration SE?
6
How can we best draw in and educate beginners and the casually curious?
16
Sponsorship proposal - the Annual Meeting of the Lunar Exploration Analysis Group
10
Should we have an [up-goer-five] tag?
4
Are other people also seeing an increase in upvoting recently?
2
How to determine when a question should or should not be duped to “…Moon landings are real?”
6
Should questions with little information due to classified nature be asked?
2
Guidance on duplicate pairs of questions