This is an invitation to attend our chat room event, where we will be covering the launch of the Ariane 5 ECA rocket, designated VA215, to launch the Eutelsat 25B and GSAT 7 satellites.

Eutelsat 25B, also known as Es'hail 1, will provide Ku-band and Ka-band direct television broadcasting, enterprise communications and government services over Europe, North Africa and the Middle East for Eutelsat and ictQatar.

GSAT 7 will provide multi-band communications services for the Indian Navy.

Arianespace’s fourth Ariane 5 mission of 2013 has been approved for liftoff on Thursday with two communications satellites to provide relay coverage over the Middle East, North Africa and Central Asia, along with the Indian land mass. 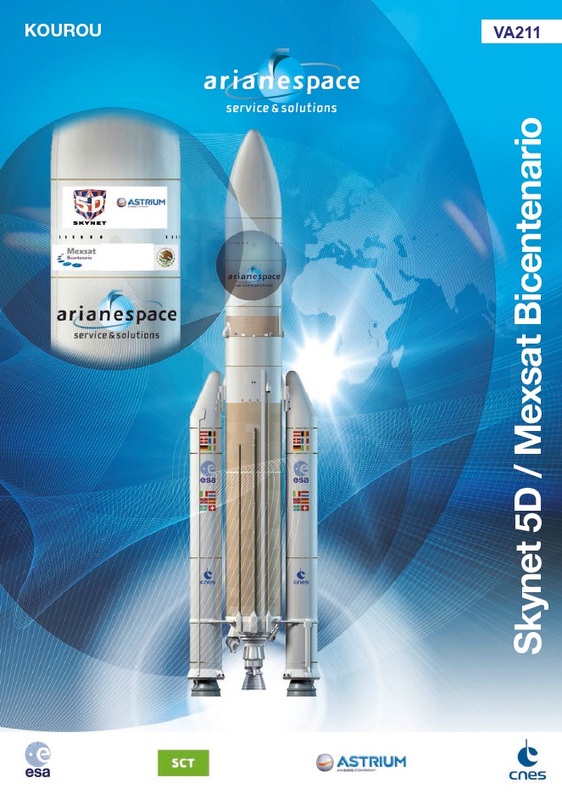 The authorization followed today’s successful launch readiness review conducted at the Spaceport in French Guiana. This procedure – held prior to all Arianespace missions – validated the “go” status of the launcher, its dual payload of the EUTELSAT 25B/Es’hail 1 and GSAT-7 satellites, the Spaceport’s infrastructure and the system of downrange tracking stations.

With today’s review, the Ariane 5 is now cleared for rollout tomorrow from the Spaceport’s Final Assembly Building to the ELA-3 launch zone – where it will be readied for liftoff on August 29 during a 50-minute launch window opening at 5:30 p.m. local time in French Guiana.

The Ariane 5 is to deliver an estimated total lift performance of 9,790 kg. – including EUTELSAT 25B/Es’hail 1 and GSAT-7, along with hardware for the launcher’s dual-payload deployment system.

EUTELSAT 25B/Es’hail 1 – which was built by Space Systems/Loral (SSL) – will ride in the upper position of Ariane 5’s payload “stack,” to be deployed first during the 34-minute flight sequence. Once in orbit, the spacecraft will be used by European telecommunications operator Eutelsat Communications and Qatar’s Es’hailSat Satellite Company to deliver Ku-band television broadcasting, telecommunications and government services for the Middle East, North Africa and Central Asia. Its Ka-band capability will open business opportunities in these regions for both operators.

To be released second as the mission’s lower passenger, India’s GSAT-7 was developed by the Indian Space Research Organisation (ISRO) to provide the country with UHF, S-band, C-band and Ku-band relay capacity over the India land mass. The satellite is adapted from India’s I-2K spacecraft bus, which also was used for the INSAT-3D satellite – lofted by Arianespace’s most recent Ariane 5 mission, performed on July 25.

The Arianespace launch this Thursday is designated Flight VA215 in Arianespace’s numbering system, signifying the 215th flight of an Ariane family vehicle.

Links to follow the event live on the Internet from Guiana Space Center will be posted in our chat room, roughly 20 minutes before the first launch window, or as the broadcast streams become available.

Welcome to our chat room - The Pod Bay - where we will discuss this event and post links to live streams covering the launch!

Today marked another mission accomplished for Arianespace’s heavy-lift workhorse as it deployed the EUTELSAT 25B/Es’hail 1 and GSAT-7 spacecraft from the Spaceport in French Guiana – on what is the 57th consecutive success for Ariane 5. 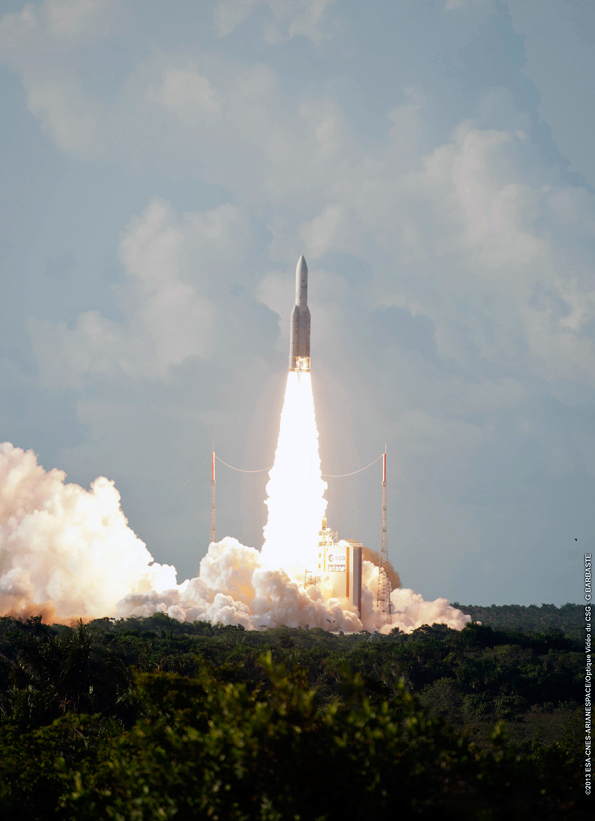 Ariane 5 delivered a total liftoff performance of 9,790 kg., including its two payloads and hardware for the launcher’s dual-payload deployment system. Today’s mission represents the 215th launch of an Ariane-series vehicle, as well as the 71st liftoff for Ariane 5.

Not the answer you're looking for? Browse other questions tagged discussion status-completed chat announcement scheduled-event .

5
Can we lose the [satellites] tag in favour of [artificial-satellites] and [natural-satellites]?
3
Live chat room event: Delta IV Heavy to Launch NROL-65 (August 28, 2013 at 5:30 p.m. UTC/GMT)
6
Please burninate (and blacklist) the "rocket-science" tag
6
Why do we have so many posts in the chat room written for computer programmers?