Do we need a canonical Mars Landings Are Real answer?

How do we know the Apollo Moon landings are real?

There's been a tremendous amount of churn on the site recently because user azot has been asking questions hinting around about the US Mars landings being faked, finally coming out and saying it in this edit to a deleted answer 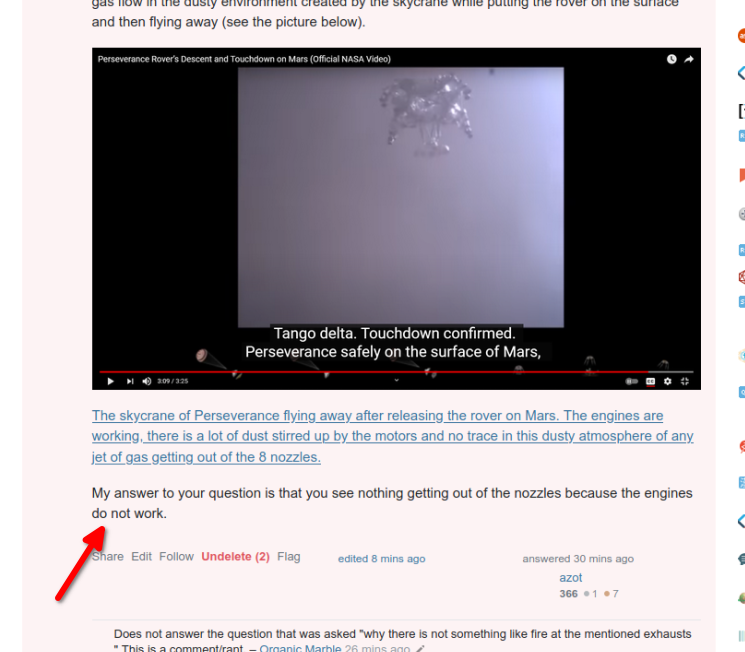 At a time when we all should be enjoying some good news and reveling in the success of this latest mission, and looking forward hopefully to more successful missions this year, this sort of distraction is not needed at all.

Do we need a "Mars Landings are real" canonical answer?

Here's my answer but I will certainly support a new canonical Mars question if someone wants to write it.

Do we need a canonical Mars Landings Are Real answer?

tl;dr: when the behavior rises to the level of trolling rather than good faith question asking, the details no longer need to match, so we can use the same question as a duplicate. Perhaps we can add:

Since about 1976, conspiracy theories denying the Moon landing and claiming it was all faked have cropped up1.

1and to a lesser extent has now propagated on to other space missions.

Since the methodology is similar:

(not to mention posting their own answers soon after as noted in the question), the problem is essentially the same "at Mars" as it is "at the Moon".

I would propose using the original "How do we know the Apollo Moon landings are real?" for duplication no matter what body is involved.

And it shouldn't matter if it's about a lander or an orbiter or a launch.

But why? It's not exactly a duplicate (this one is at Mars, not the Moon).

My thinking is that posting a series of hoaxer-type questions is a kind of trolling, and moving from one astronomical body to the next or one class of mission to the next can continue for a long time. It is not an attempt to learn about a specific mission, it's an attempt to make a mess and frustrate people. Our canonical Apollo Moon landings question sufficiently covers the whole "hoaxer" situation even though not all of the specifics match exactly.

The alternative, making a new canonical answer for each new string of trollings is simply a lot of work and it will get harder and harder as the trollings move to less and less documented missions types.

How about just adding a foot note to our canonical hoax dupe:

Since about 1976, conspiracy theories denying the Moon landing and claiming it was all faked have cropped up1.

1and to a lesser extent has propagated on to other space missions.

and perhaps if necessary, one more answer to it that addresses generalizations to other destinations.

At a time when we all should be enjoying some good news and reveling in the success of this latest mission, and looking forward hopefully to more successful missions this year, this sort of distraction is not needed at all.

We need to do this to maintain the integrity of the sites questions and answers, and to avoid an out-of-control spiral of trolling. We are all lucky that Stack Exchange exists and if we enjoy using it most of the time we have some responsibility in maintaining it, even the tasks that are less than pleasant.

So we should pitch in out of a sense of giving back to a site that provides us said enjoyment, not to eradicate aspects in order to form a more perfect experience for ourselves. This is simply housekeeping.

10
Do we want to touch the "moon hoax"?
4
Too broad questions?
13
What shall our canonical question and answer regarding moon hoax conspiracy theories be?
4
The answer to the question about Moon landing hoax theories
2
How to determine when a question should or should not be duped to "...Moon landings are real?"
4
Who did I irritate enough for someone to mass downvote some of my answers?
2
Should we also close "Are the Mars landings real?" questions as duplicates of "Are the Moon landings real"?
6
Is this OK? Because I don't think this is OK