Slightly nonstandard questions from new users frequently getting the silent, drive-by insta-close votes, can something be done?

I feel like there is a handful of users who stop by the site thinking "let's see, what can I close today?" or "Hmm... what looks particularly close-able?"

I am sure that's not the case, or at least that it's not so black-and-white, but still, for many questions by new users, if it is worded in a slightly non-standard way, or could be adjusted slightly to be better, there seems to always be one, or two close votes within hours, and these almost always appear without any kind of a helpful comment or explanation.

This makes the site less welcoming, and being welcoming is really important and part of our new SOP:

What makes this even more unwelcoming is that the silent close votes (those without any helpful comment) are invisible to low-rep users.

In SO or a few of the very high question-rate sites, the old "close early, close often" thinking was a way to keep heads above water. Here with what varies between 5 and 10 questions a day (it's picked up over the last several years, but I think it's roughly 4,000 questions in the last 1,000 days) this kind of quick, silent close voting is just not warranted.

I think there are at least two better and more welcoming approaches:

I've been doing both of these for a while now and the results are quite good. Most of the time I get a "thanks" message, everything is fine, and the OP learned something through positive reinforcement.

On the other hand, closing the question makes a big mess, renders the question unavailable for answering, and requires more work to re-open it. To me that unpleasant experience seems punitive to new users, and profoundly unwelcoming.

Can something be done to encourage the silent insta-close voters to consider just leaving the question alone for a while, especially in the situation where the OP doesn't have enough reputation to even know that close-voting is in progress?

I don't know how to search for many examples, the most recent is Mass manufacturing of satellites which can probably be improved without the close/open cycle, and Game for teaching basics of orbital mechanics which had at least two close votes when I left my comment, and has since collected ten answers 41 up votes and 13 favorites. 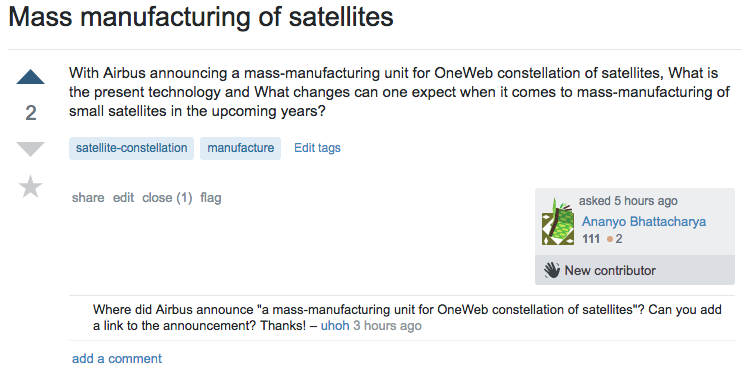 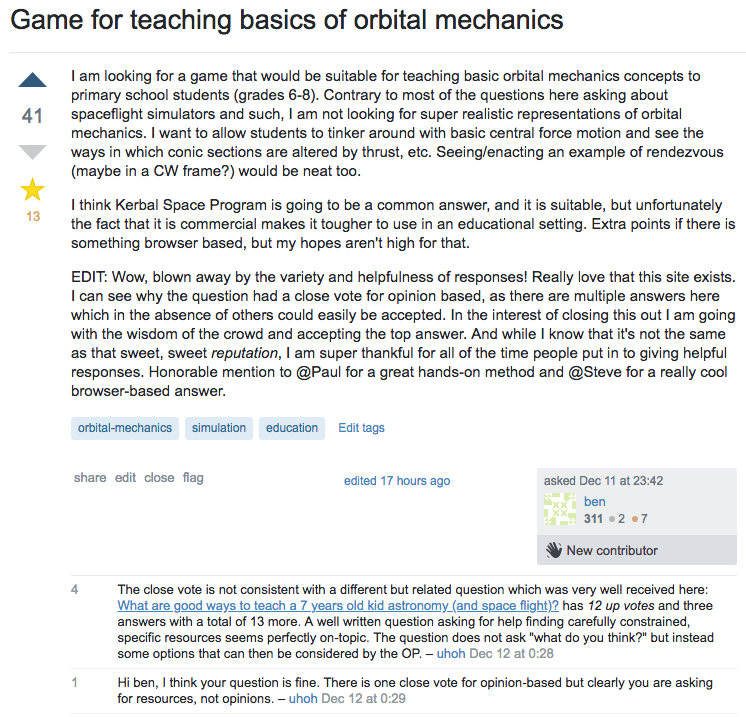 As promised, here is the full answer. The best thing you can do in these cases is to comment on the questions to help the OP clarify things and to make a case for the question. Also, if necessary, you can take specific issues to meta to resolve.

Other than that, there is not really much that can be done. Close votes are discretionary by nature and are mostly anonymous until the question is closed. It is impossible to head off these actions by any other means than what I've already suggested above. You mentioned the possibility of calls to action--these have been done. In my experience, the majority of users who leave reactionary close votes do not care about the calls to action. They either will not read them or will not care about the points made if they do.

If you would like, you could propose some changes to the question closing mechanism or to privileges in general to try to encourage certain behavior. You could do that in another question here, but it would probably get better attention on Meta Stack Exchange. If you want to toss around some ideas in chat, others might have some thoughts.

Recently the question Space Sandbox? Good idea or a bad idea? and that could be a potential solution.

Also making helpful edits and improving tagging is one of the most effective ways to slow down drive-by down votes and close votes, as is posting helpful comments to the question's author in order to clarify or otherwise improve it.

Just as an example I recently edited Is it possible to buy a used geostationary telecom satellite and move it to lunar orbit? and added the design-alternative tag to it.

Not the answer you're looking for? Browse other questions tagged discussion vote-to-close be-welcoming .

10
Are we downvoting too much?
6
Be welcoming - a new Space Exploration Stack Exchange
3
What's the easiest way to get a link directly to an answer?
0
Space Sandbox? Good idea or a bad idea?

5
Overzealous insta-closing of new users' first question with less than 5 site Q's per day here
6
Be welcoming - a new Space Exploration Stack Exchange
2
Is my answer being sabotaged?
2
Is “unclear what you're asking” close reason just a catch-all for your own close reason, or does it mean what it says?
2
Why was my flagging a Dunning-Kruger effect comment declined?
0
When exactly was the solenoid question reopened?
3
I edited but forgot to vote to remain open a question in the review queue, is there a way to do it now? Would it make any difference if I did?