Are other people also seeing an increase in upvoting recently?

I've noticed an increase in what looks like random up-voting of my posts over the past few months, and just now had a second reversal of serial up-voting.

I've experienced a(t least one) case of serial downvoting in a different site, but serial upvoting is a new experience for me.

In the case of votes on my post, might this just be a bit of beginner's enthusiasm, or is "a type of voting fraud" being perpetrated against me here as well, but with the opposite sign?

I'm not a "rep freak" and don't take the number too seriously, and would advocate for a two digit logarithmic display for rep (e.g. mine would be 4.4) in many instances of rep-display SE-wide to help put this in perspective. (Also the point behind this joke about prime numbers)

But since many people do, I thought I'd explore this further.

The plateau between November 2017 and March 2018 appears flat and yet "noisy" because my bounty rate was equal to the upvote rate. I don't know how to plot the cumulative upvoting by itself.

It was me I've been going around and up voting everybody's posts like crazy to get my up vote badge and it is easier to up vote 1 persons posts at one time. I tend to focus on posts that have the least amount of attention or negative score that IMO deserves an up vote but will be refraining from over voting on one profile. I have changed the way I up vote now I know it is a problem.

A quick search doesn't reveal any instances of "serial upvoting removed" in my history for the past 4 months.

This answer mentions the related questions in the margin and that reminded me that I may have done that when I was a new user as well, to a limited extent. Entering a new site full of answers I've never read before makes me feel as happy as Homer Simpson in Flushing Meadows, NY.

However it would feel more than a little strange if someone more experienced were to engage in this pattern, especially on multiple days.

This plus votes from previous days have already been auto-deleted by the "suspicious voting pattern detection bot" (or by a moderator or system developer) in under one hour.

If such a voting pattern continues to happen between two users mutually or from one user towards another, or otherwise falls outside of normal voting patterns, moderators and/or developers may investigate the matter; intentionally voting merely to reduce or inflate another user's reputation is considered abuse.

Such votes will generally be invalidated as part of an automated process that runs every day, but may also be invalidated manually by the staff after an investigation. When the votes are invalidated, the reputation gain or loss from the votes is undone, which results in a record in the recipient's reputation history labelled "voting corrected". 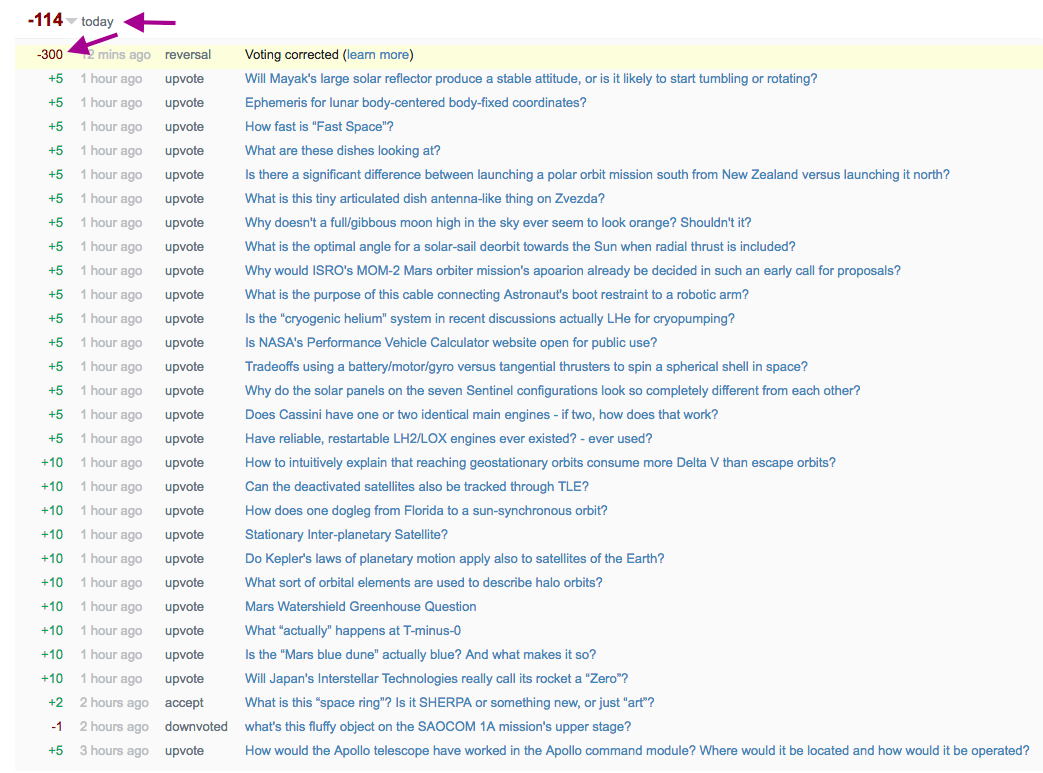 Once in my time here at SE I had a serial upvoting reversed. (It may have been on sci-fi though). And yes, in the last month I had a couple spates of enough random upvotes that I was concerned it might happen again (it didn't). I ended up concluding that someone was clicking on a lot of the "related" questions on the side, so a good thing, I guess.

3
“Serial Voting Reversal” unwarranted?
1
Second time I've ended up with my answer becoming double-posted. What might be happening here?

16
Sponsorship proposal - the Annual Meeting of the Lunar Exploration Analysis Group
1
What prevents me from seeing this close vote in review?
5
Overzealous insta-closing of new users' first question with less than 5 site Q's per day here
1
Slightly nonstandard questions from new users frequently getting the silent, drive-by insta-close votes, can something be done?
2
Are third party robots editing my posts and removing my sentences?
2
Is “unclear what you're asking” close reason just a catch-all for your own close reason, or does it mean what it says?
1
Best tagging for the newly named Nancy Grace Roman Space Telescope?
2
Should we also close “Are the Mars landings real?” questions as duplicates of “Are the Moon landings real”?